Car Dham Yatra takes the pilgrims on a potentially life-changing trip on the hills of Devbhoomi Uttarakhand. Being located on these ancient and highly spiritual hills, the weather conditions are very unpredictable and ever-changing. Char Dham Yatra is an eternal journey which is on every traveler’s and avid devotee’s bucket list. The search for moksha or the ultimate salvation can be achieved through this holy and refreshing circuit. It is extremely vital for one to know when is the best time to visit Char Dham temples and have a soulful Yatra. Given below is the detailed information one needs to know about the weather conditions of the various temples included in the Char Dham Yatra which are Kedarnath, Badrinath, Gangotri and Yamunotri. 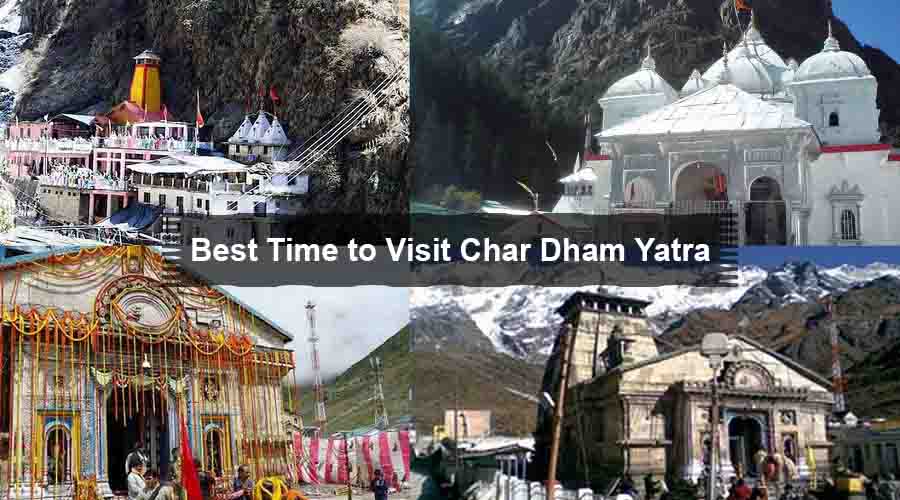 Being situated on a very high altitude Kedarnath Dham experiences harsh climatic conditions and if not taken extra care, your pilgrimage may go to waste. The best time to visit Kedarnath would be during the peak tourist seasons of May to early June. During this time the temperature is not warm but bearable and is devoid of any unexpected climatic conditions.

Pro Tip – Avoid travelling on the hills of Kedarnath during the monsoon season as the trails and paths gets either flooded or prone to landslides. This is during the months of July to early September.

Being a relatively easier temple to visit in the Char Dham Yatra circuit, Badrinath Dham temple can be visited any time of the 6 months when the shrines remain open for Darshan. The best time for visit in Badrinath would be during the months of May to June and September to November. The prior months form the peaks season for travelling whereas the latter months are relatively empty and not so crowded.

Pro Tip – If the cold weather does not bother you then try to cover the journey to Badrinath during the winter months that goes on till its closing time. Since around this time, everything is cheaper and a lot more affordable like accommodation, food items and transportation.

The glistening white temple of goddess Ganga which resides on the banks of the holy Bhagirathi river is also one of the most easily accessible temples of the Char Dham Temple. Although much more accessible as compared to the rest of the Dham temples in this circuit the best time to visit Gangotri temple is during the summer months of May to September. During this time the pilgrimage is easier due to pleasant and comfortable weather conditions.

Pro Tip – Gangotri is surrounded by a number of tourist attraction spots which holds a lot of religious and spiritual significance. Going there during the peak tourist season will enable you to cover these destinations with a lot of ease and comfort.

Yamunotri temple which is dedicated to goddess Yamuna is situated in a relatively remote destination as compared to the rest of the Dham temples. Being in such an offbeat place is can be visited during the months of May to June / early July (to avoid unexpected situation). This is the most preferred and a very favorable time to travel to this remote pilgrimage destination which is located on the banks of the holy river Yamuna.

Pro Tip – One must avoid travelling to Yamunotri during the months of either monsoon or winter. This is the time when the weather is harsh, unpredictable and not so favourable for pilgrimage travel since the hills remain prone to unexpected changes.

Vaishno Devi Yatra in Jammu and Kashmir is an extremely highly revered sacred Shaktipeeth pilgrimage in India. Surrounded by scenic natural beauty the journey to Mata Rani Ka Darbar i.e. the holy cave shrine is a journey which every devout Hindu and devotee of the goddess makes sure to undertake. People often team up this holy visit with a wonderful sightseeing in Jammu and Kashmir which makes the...

Char Dham Yatra – the most auspicious and pious pilgrimage not only outside but also an intense journey within yourselves. The end of the journey guarantees moksha or salvation which is the ultimate liberation, the ultimate achievement of any living being. This p...

The holy Yatra of Char Dham takes a pilgrim through the highly revered spiritual and religious ancient temples of Kedarnath, Badrinath, Gangotri and Yamunotri. This pilgrimage is undertaken annually by devout Hindus from all over the world who brave harsh weather c...

Tired of our daily life, in need of an adventure or the need to seek inner peace, the need to forgo of our sins and have a new and better approach to life. Then you know that Chardham Yatra is the best way to do all of this. While many people plan and go for Chardh...