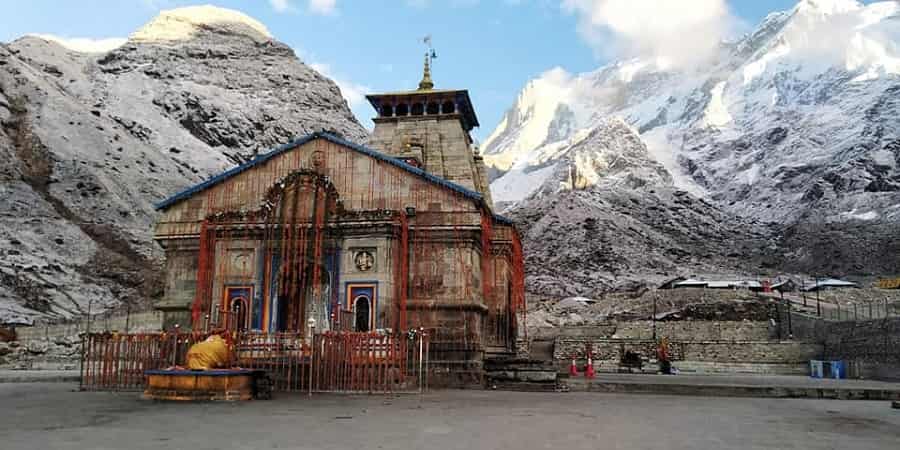 The ancient shiva temple of Kedarnath dham located high on the hill top and against the backdrop of the incredibly majestic mountain range of kedarnath dome, is steeped in ancient historical and mythological significance. although the origin of this temple is not known there have been a lot of studies and researches done on the structure which gives us some insight about the temple which was once unknown to the world.

Here are Some Origin Stories Related to the Temple

There are numerous mythological accounts pertaining to the existence of this iconic temple and the highest jyotirlinga in the world. one of them being that during the Vedic period 2 saints called Nar and Narayan who themselves were an incarnation of lord Vishnu had made their way to kedarnath temple while on a lookout for the perfect spot to perform meditation to lord shiva. They performed rigorous meditation here which immensely pleased lord shiva that he appeared himself in front of the duo and asked them what they wished for. They asked the lord to make the jyotirlinga in kedarnath his permanent abode and the lord agreed. Ever since then people have been making their way to this temple to offer their prayer to the lord himself.

The 2nd legend tells us about the story of the Pandavas. Since the very beginning king Pandu is said to have spent a substantial duration of his time on the hills and even the Pandava brothers are said to spent some time here as young kids. This is also clear with the presence of the holy town that goes with his name i.e. Pandukeshwar. However, it was not until the end of the Kurukshetra war that the Pandava brothers accompanied with their consort Draupadi had came here with the advice of sage Vyas. They had come here to perform some meditation and ask for forgiveness from lord shiva for which they had first laid the foundation of this holy temple and the jyotirlinga which is worshipped by everyone today.

Sage and avid philosopher of 7th / 8th century, Adi Shankaracharya is said to have been credited with establishing a range of temples, Matths and shrines all over the country through intellectual and theological debating. When he had made his way to kedarnath as a result of constant efforts made by him to re establish and reignite the feeling of Hinduism within the hearts of the people of India, he re-established the abandoned temple of kedarnath into one of the most sacred and holiest places of shiva worship in the world.

The temple of Kedarnath in Rudraprayag district is also the same place where Adi Shankaracharya is said to have taken his Mahaparinirvana and spent his final moments there although he belonged to Kerala. Shankaracharya samadhi present here marks this fact.

The temple was engulfed in a 400 year old mini ice age that had encapsulated the entire region, however interestingly enough nothing happened to the structure of the temple and it remained intact and without any cracks or dislocations.

When the temple shuts down for darshan owing to the hostile climatic conditions, inside there is a small lamp which remains mysteriously burning throught this time of closing. When the temple is reopened the burning diya can be seen.

According to researches by various scholars and researchers the temple structure shows signs and hints of very light pink colour which is said to have been the result of the slowly moving away glacier when it was encapsulated in the age old ice fall.

There are no roads leading up to the entrance of the temple owing to its location and high altitude. The only way of reaching is via trekking the trail from Gaurikund or hiring a helicopter service from one of the many helipads located all around the region here. this is one of the easiest, luxurious and one of the most comfortable ways of getting darshan of baba kedar.

The jyotirlinga which is worshipped here inside the temple is very unique in shape since it is triangular and of glistening black nature. Being one of a kind this Lingum holds immense relevance and importance in the lives of devout Hindus who come here annually to offer their prayer to this lingam.